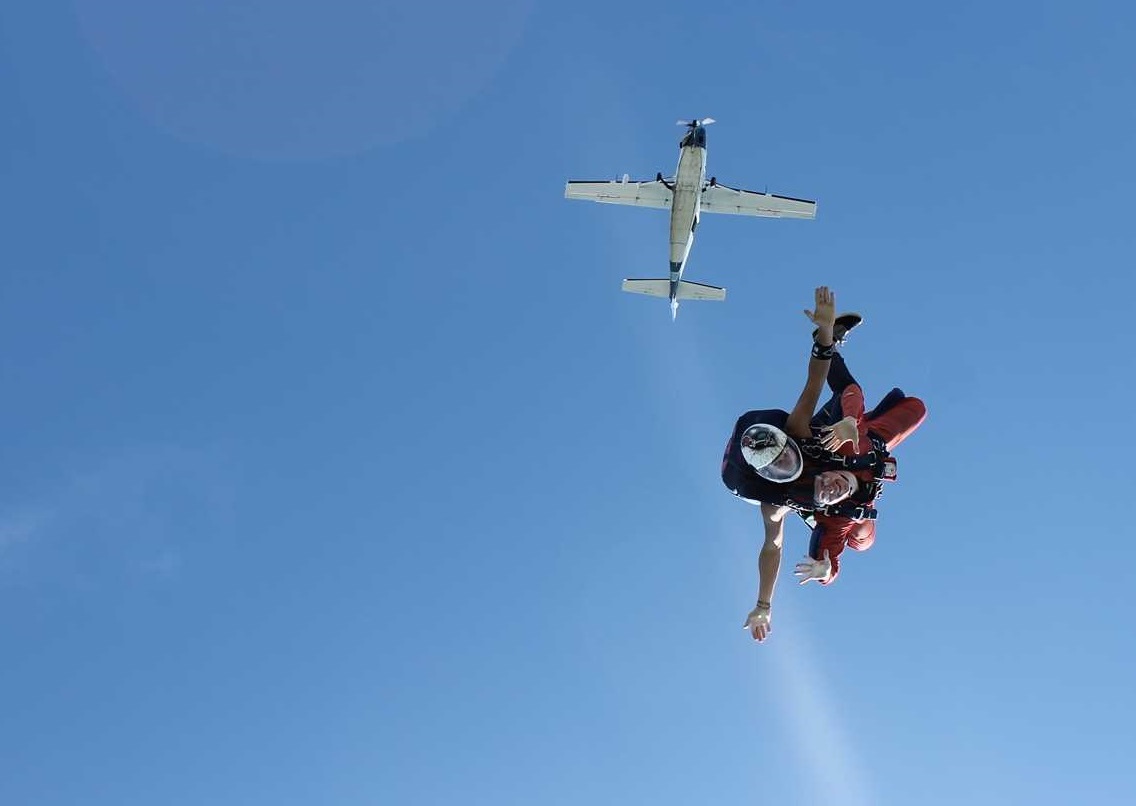 I was born and raised just outside of Liverpool, United Kingdom. In 2010, I moved to Toronto on a temporary work permit and spent 6 months exploring the city and meeting new people. I enjoyed Toronto so much that I wanted to make the move permanent, but not long after returning to the UK, I landed a job in the offshore oil and gas industry. As fate would have it, the rig that I was assigned to was due to sail to Canada for its next contract. With a new work visa in hand, I was fortunate enough to move back to Canada in July 2013. I obtained Permanent Residency in January 2016.

I have had a keen interest in GIS ever since my first introduction to the topic at Liverpool John Moores University, but my passion for maps goes back to childhood, when I would spend countless hours exploring a world atlas and the illuminated globe that was passed down from my older brother.

In February 2016, I enrolled in the Applied Digital Geography and GIS Certificate program at Ryerson University in Toronto. I was still working offshore as a Sr. Data Analyst, but despite really enjoying this role, the 3-week rotation schedule was less than ideal. I had the opportunity for a change in June 2017 when I accepted a 3-month internship as GIS Analyst at Targeo, a media marketing company in Brampton, Ontario. After incorporating as Loughran Mapping Solutions, I obtained valuable experience as a GIS Technician at Metrolinx working on numerous high-profile projects. Now I am at the Regional Municipality of York, and was fortunate enough to be a part of the team that won the 2020 Esri President's Award, their highest honour. Esri recognizes one organization each year for making data-informed decisions that impact the world in a positive way.

This website is designed to help showcase my abilities and understanding of GIS and cartography, while demonstrating some of my other skills. It provides a platform for peers, colleagues, and prospective employers to learn a little more about me, including my drive and motivation to learn new things. I update the website regularly.

In my spare time, I like to experiment with custom-made wall maps by using various vector tile basemaps. I plan to incorporate this work as a side project for my business in the near future.

The Regional Municipality of York - Vaughan, ON.

The Regional Municipality of York - Newmarket, ON.

Brought on to assist team in designing, building, and testing organizational data model, while also helping to enable business users.

Joined the GIS marketing team initially on a summer internship, to assist on project to standardize database and associated spatial data.

After the winter 2018 semester, I graduated with a certificate in Applied Digital Geography and GIS from Ryerson University. The program consisted of six courses and was designed for professionals currently practising or seeking careers in digital geography or GIS.

The first four courses of the certificate were taken online using the distance option made available to Continuing Education students. The courses really helped to build upon the skills that I initially acquired at Liverpool John Moores University, while also introducing newer concepts and technologies. The final two courses were taken in-person on campus.

The table below displays my course selection and results: 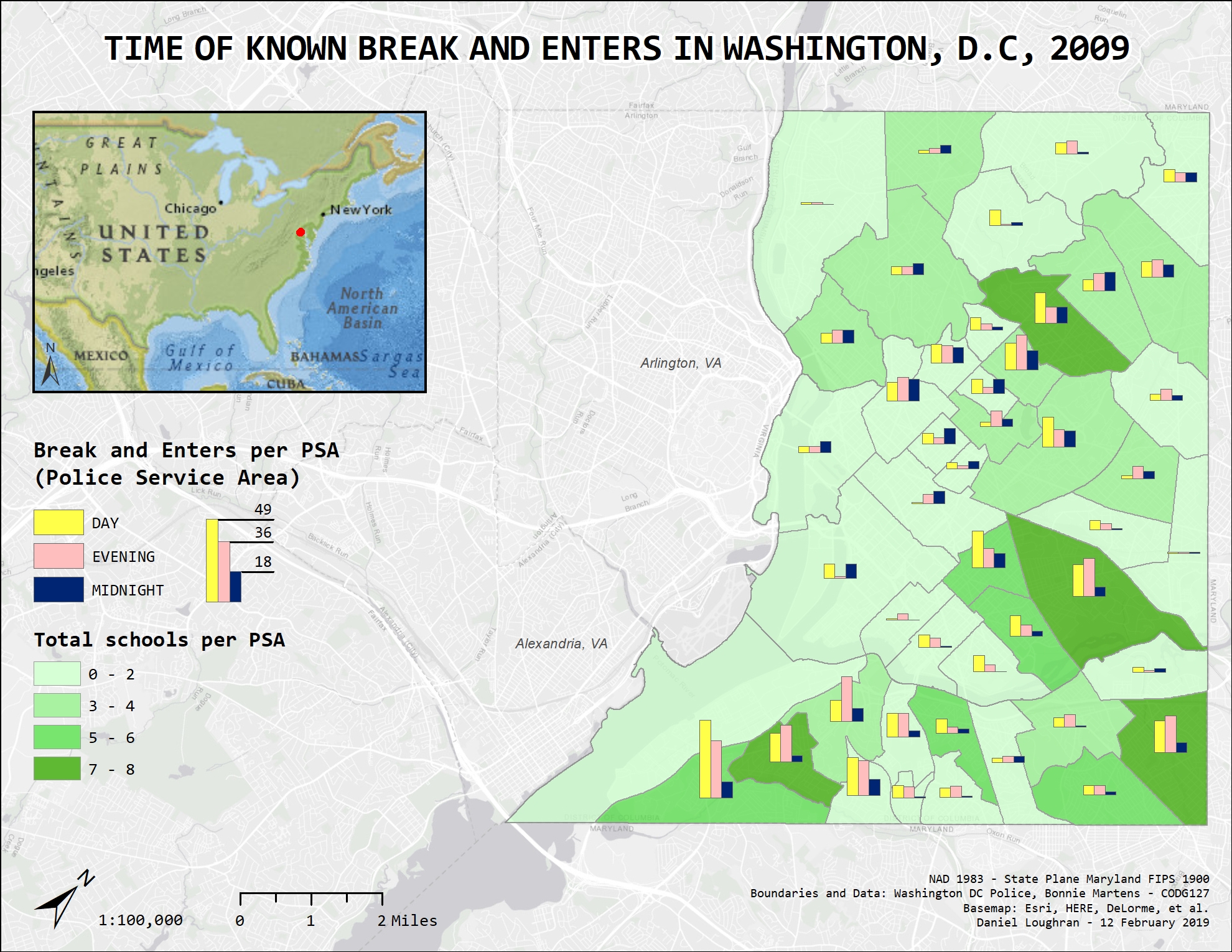 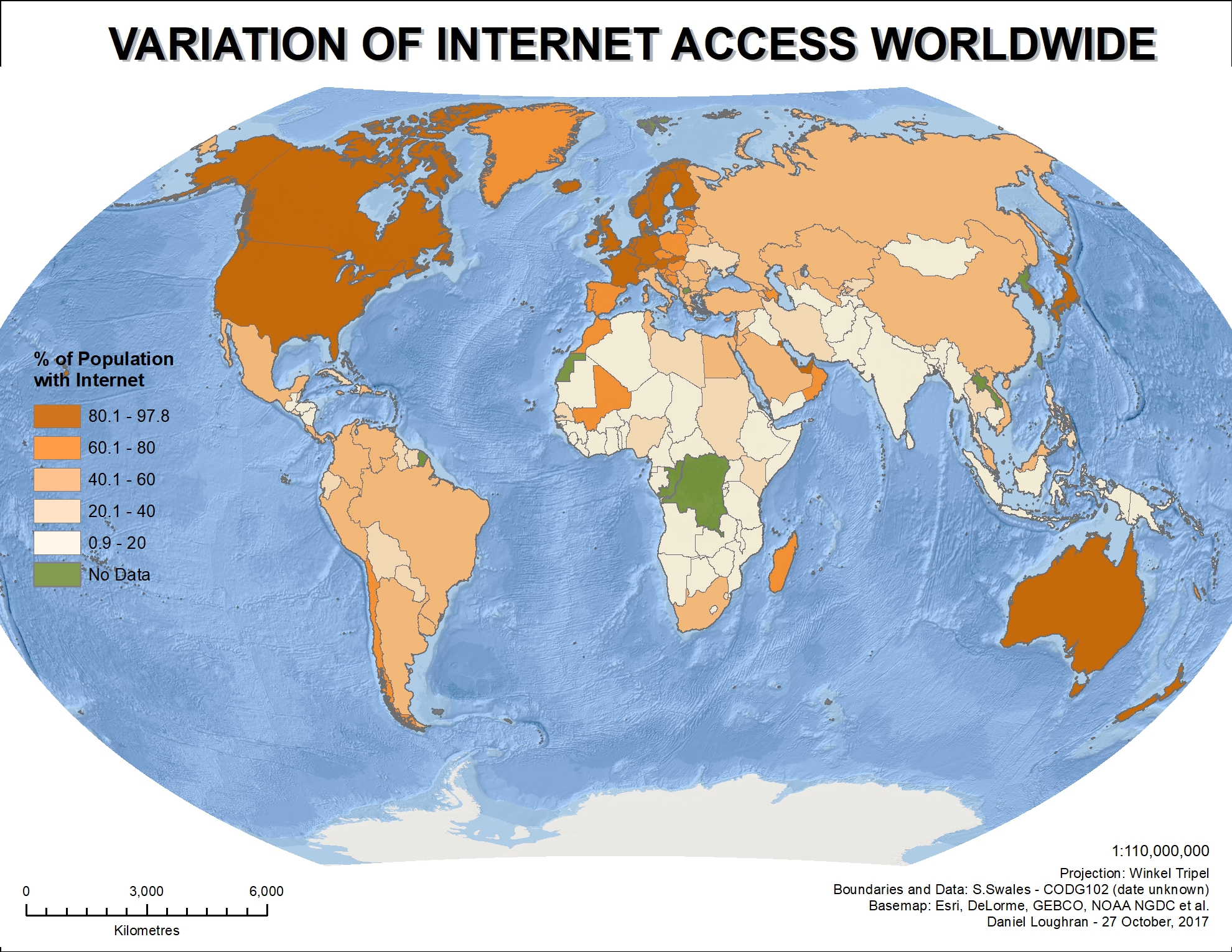 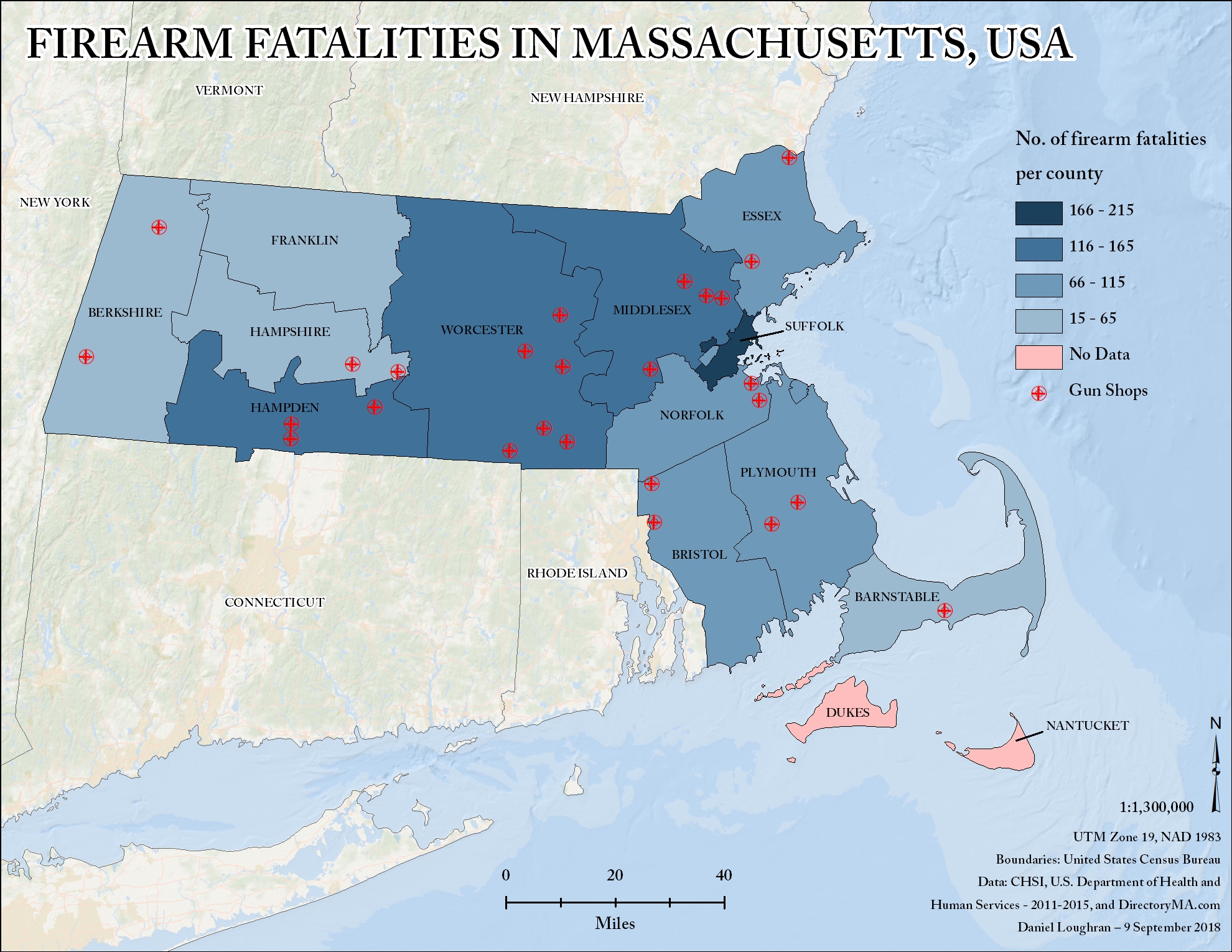 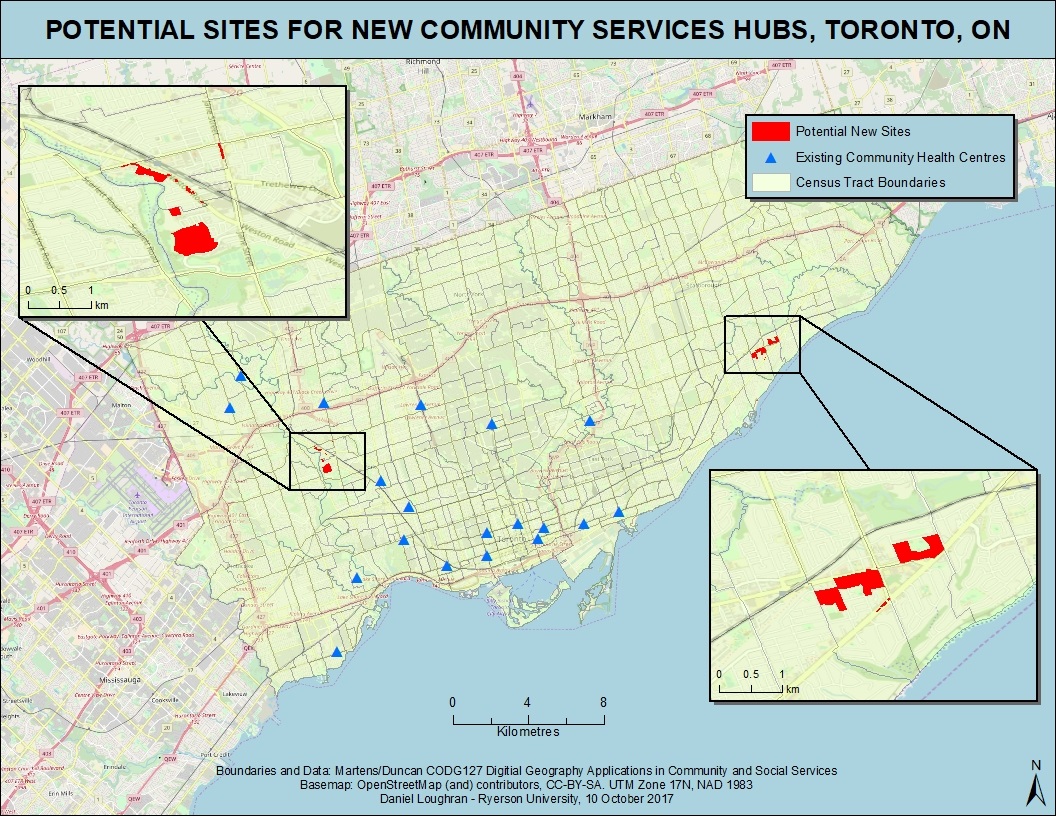 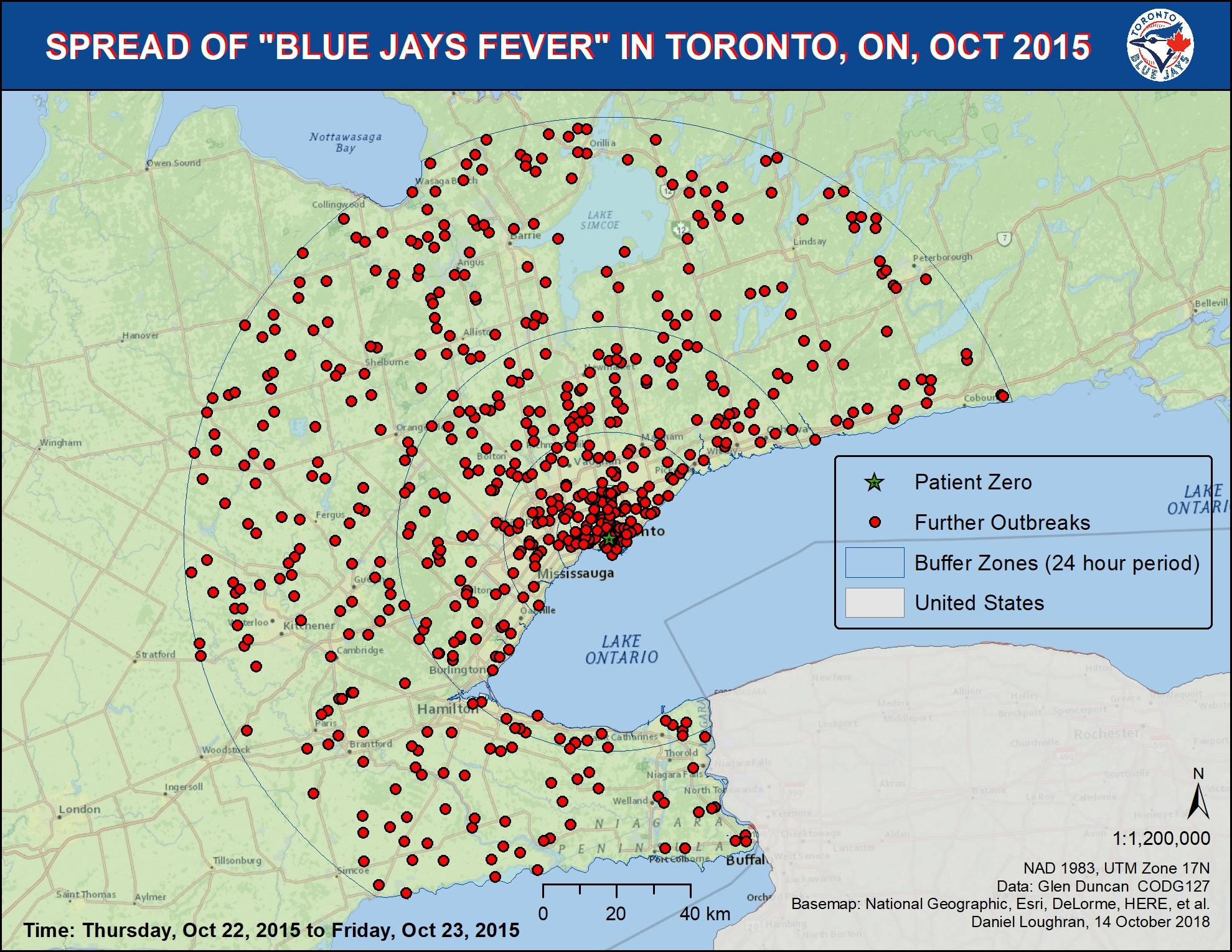 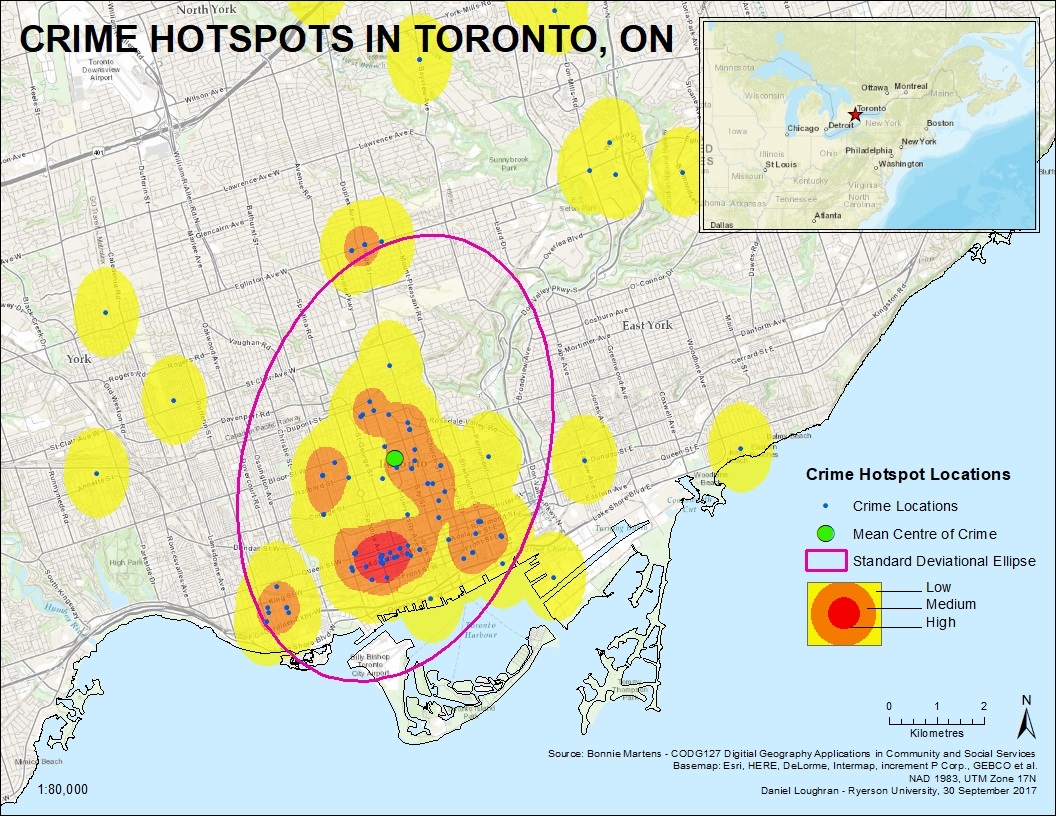 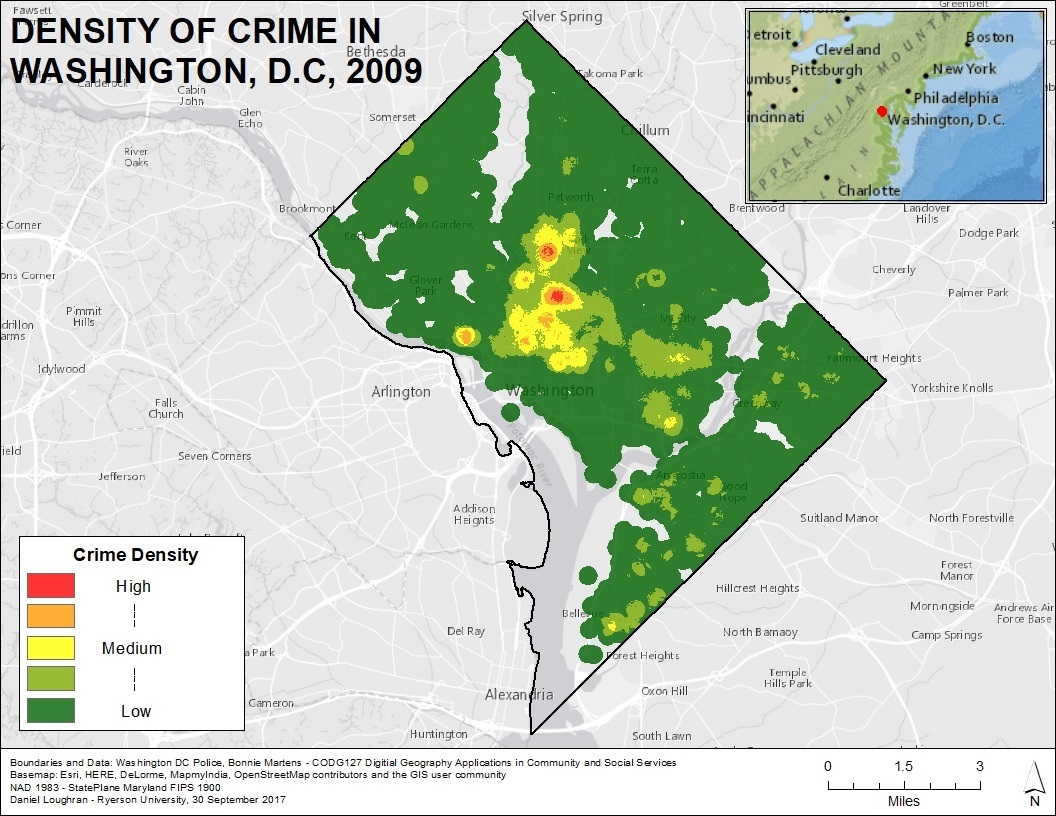 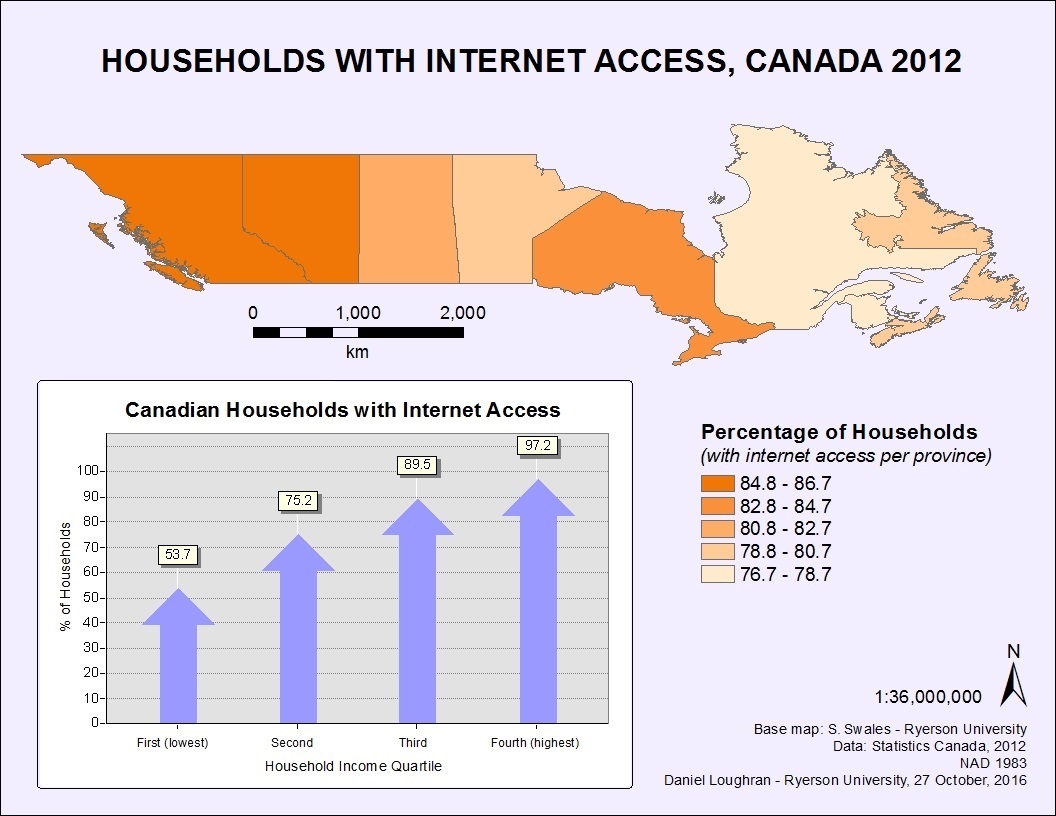 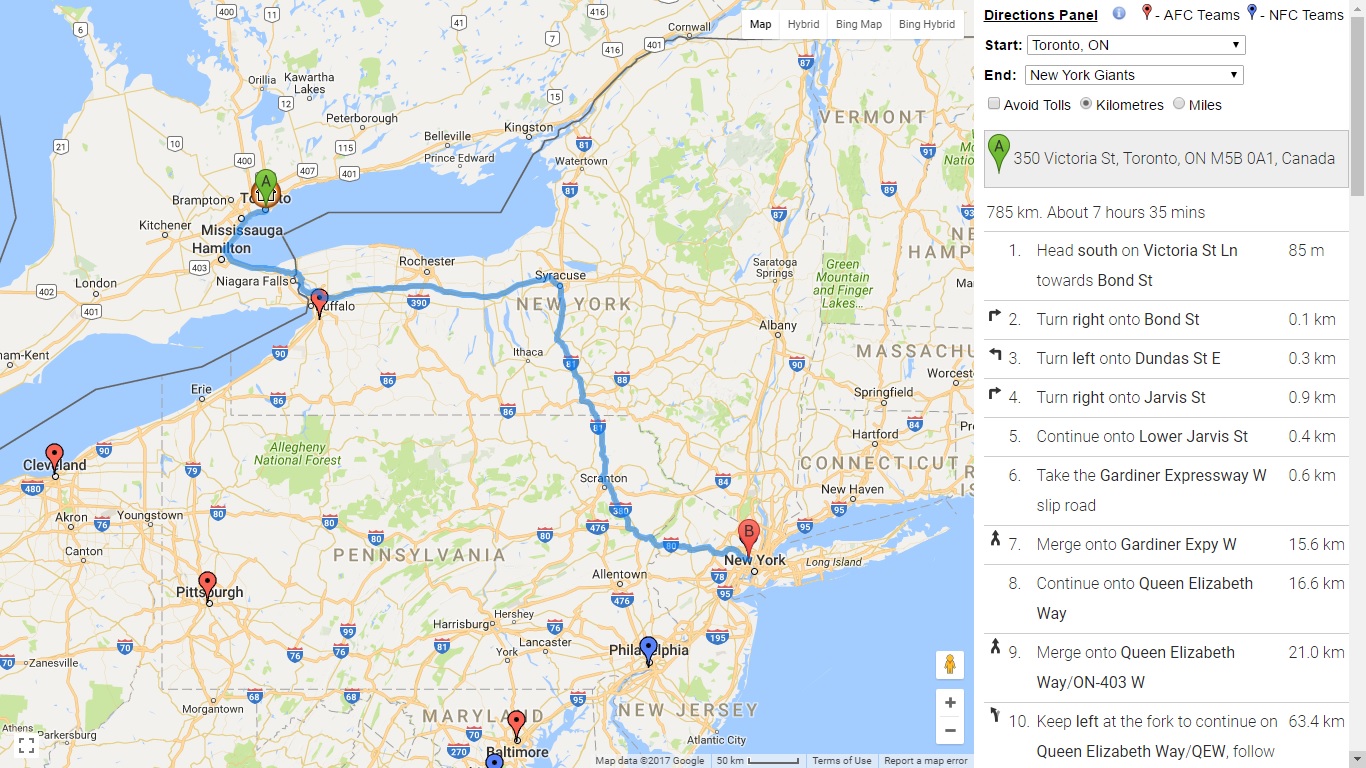 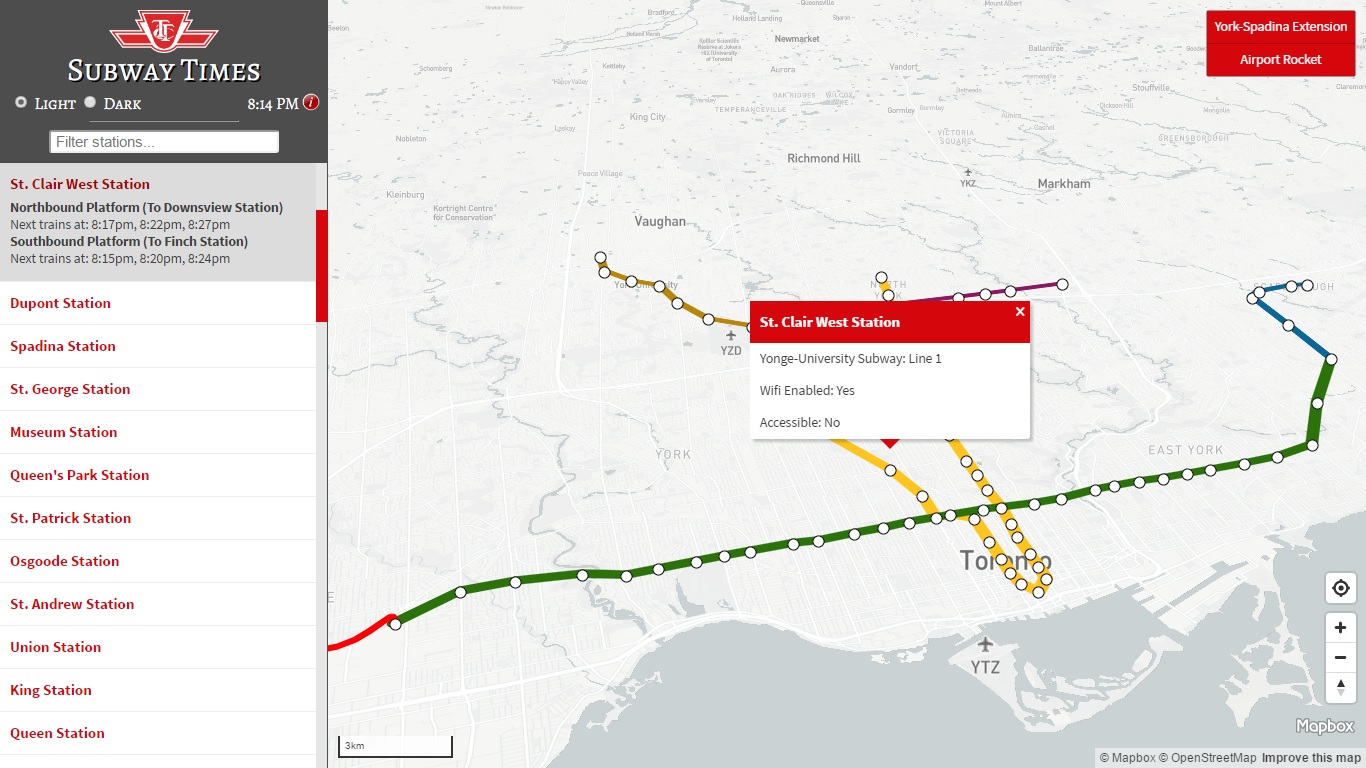 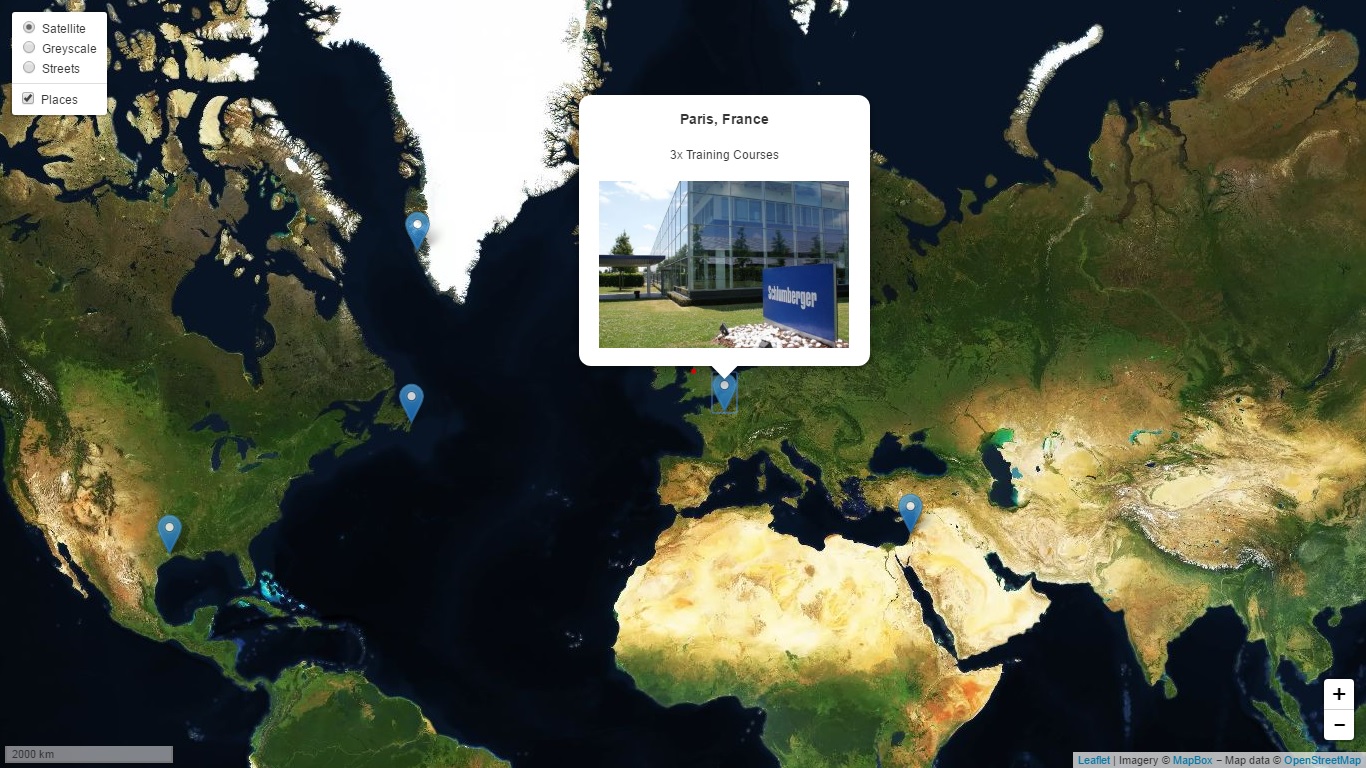 Using SQLite, a relational database management system, it is possible to create, read, update, or delete data. The following example code is used to create two tables called 'NFL Teams' and 'NFL Stadiums'. Then using a select statement with a join clause, the two tables can be joined using a common attribute, which in this case is the 'NFL ID'.

This code can be tested at SQLFiddle. Below is a screenshot of the result: 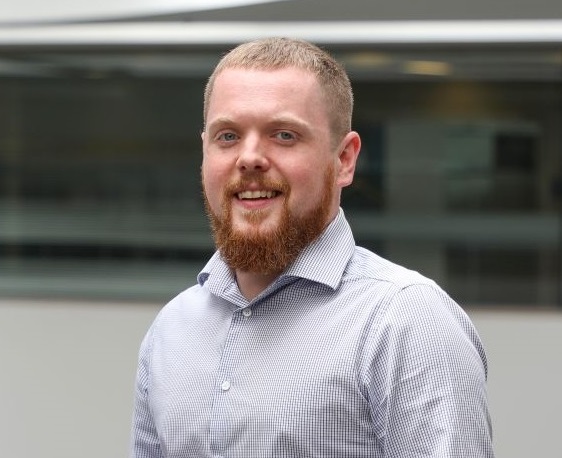